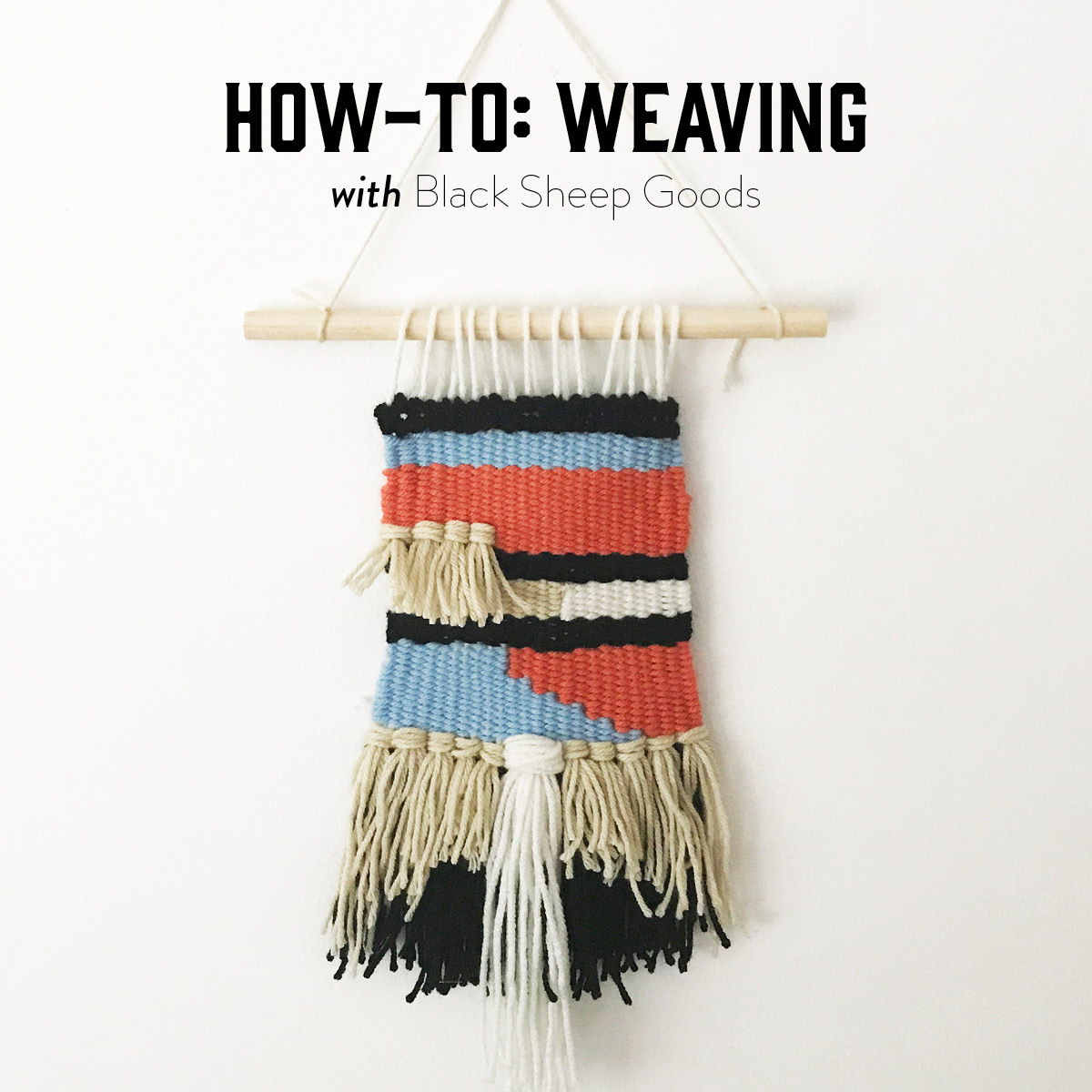 There is something wonderful about weaving. It’s quiet, repetitive. It’s a way to physically force yourself to be in the moment- a tangible mindfulness. This is true for many fiber arts. There’s also the history factor, people learned these techniques long, long ago and they have been passed down generation to generation. Black Sheep Goods has found the perfect way to continue passing on this tradition with their affordable at home weaving kits, instructions included!

Although these kits are meant for beginners, after taking a look at the instructions I knew it would be really helpful to have a more in-depth visual guide through the process. So that’s what I aim to do! And I’ll add that although I did some weaving on a loom in college, this is my first wall hanging and I won’t tell you how long ago college was. 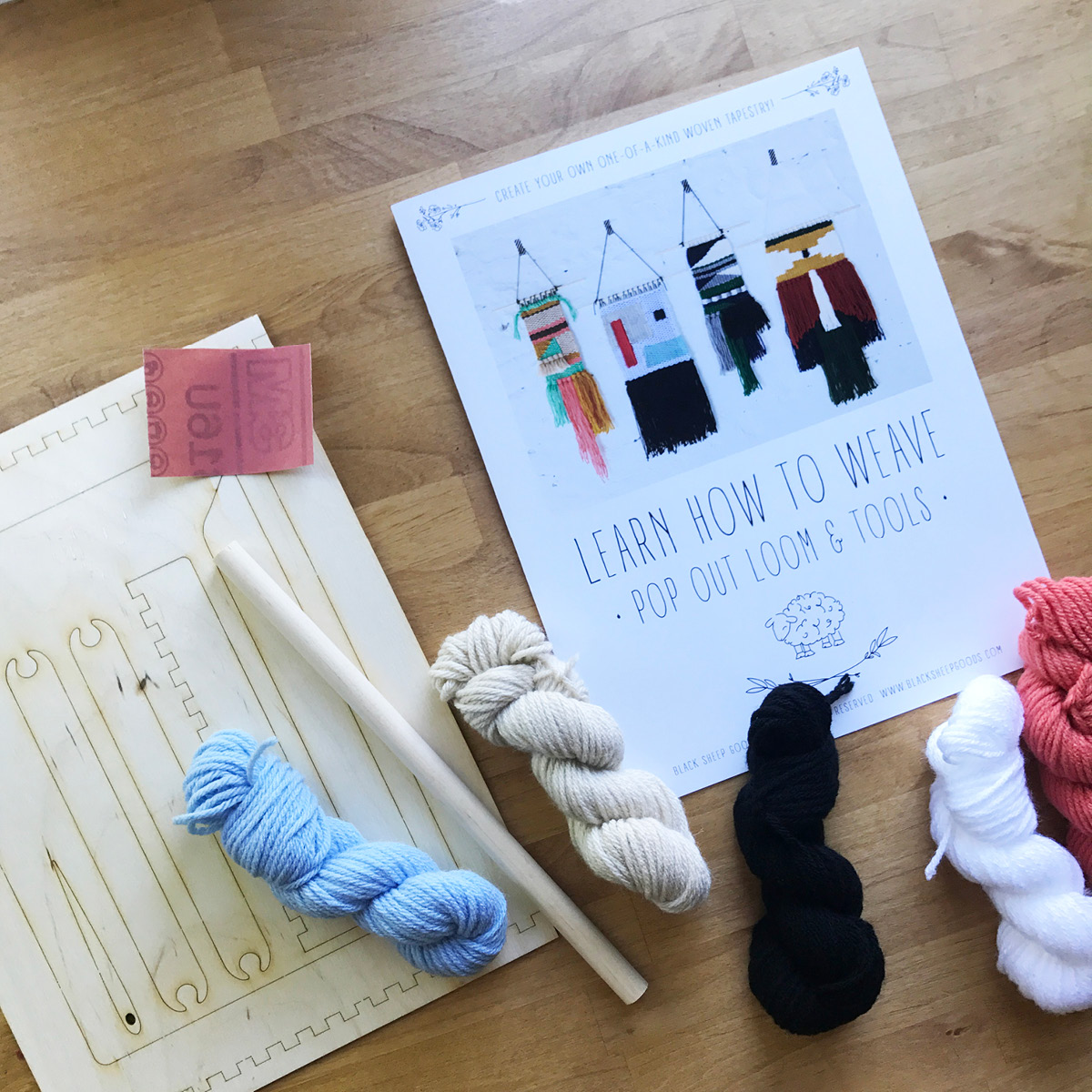 Here’s everything that comes in the kit. 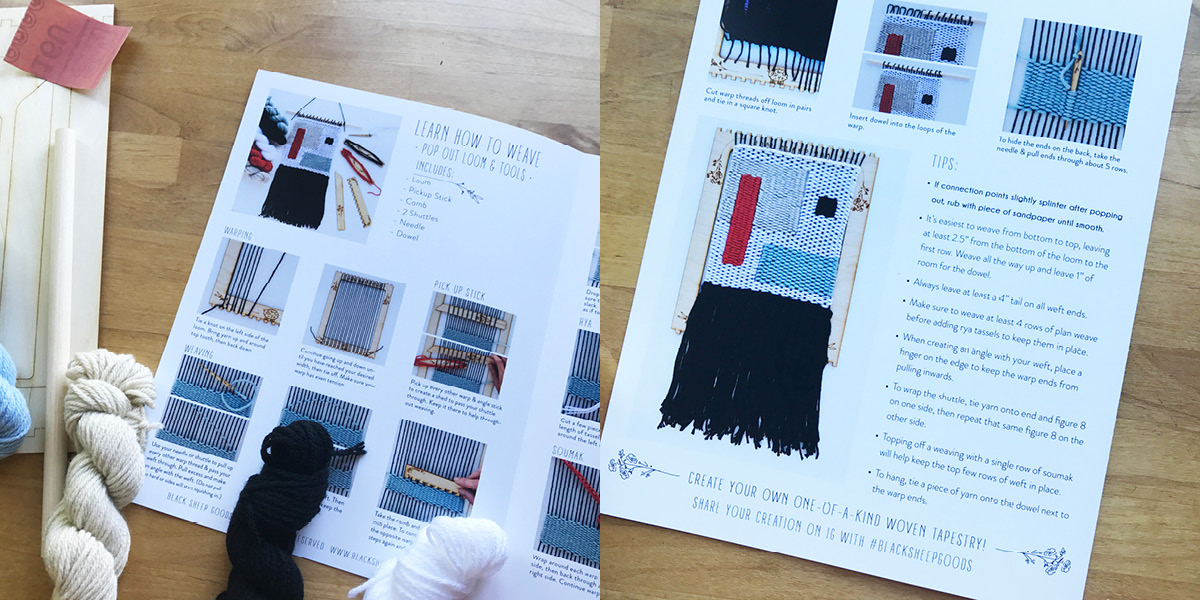 Here is peek at the instructions that come with it. Those “tips” on the right- are crucial! Read through them all CAREFULLY before you even begin. 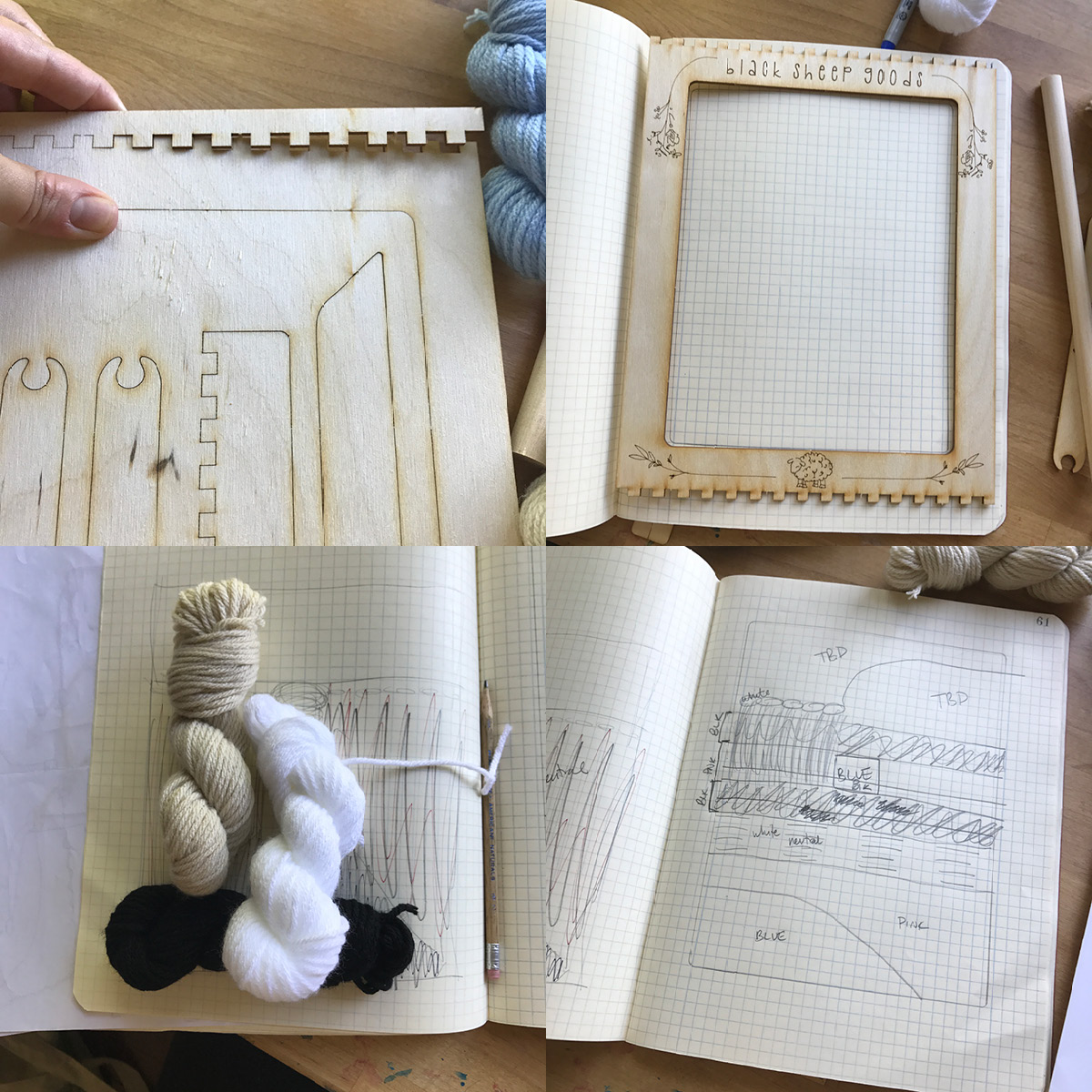 To start, I punched out all of the loom pieces from the main board. The kit comes with a piece of sand paper in case of any uneven breakage, but I found mine came apart easily and cleanly. Next, I made a plan in my handy-dandy gridded notebook. It was hard to do, and I had anxiety about running out of any given color, so I left it sort of unfinished. As I worked, I found I preferred to just go with the flow anyways. Also, I didn’t think of this at the time, but realized you could make your wall hanging any width, not just the entire width of the loom. If you wanted it more narrow, you would just use less threads. 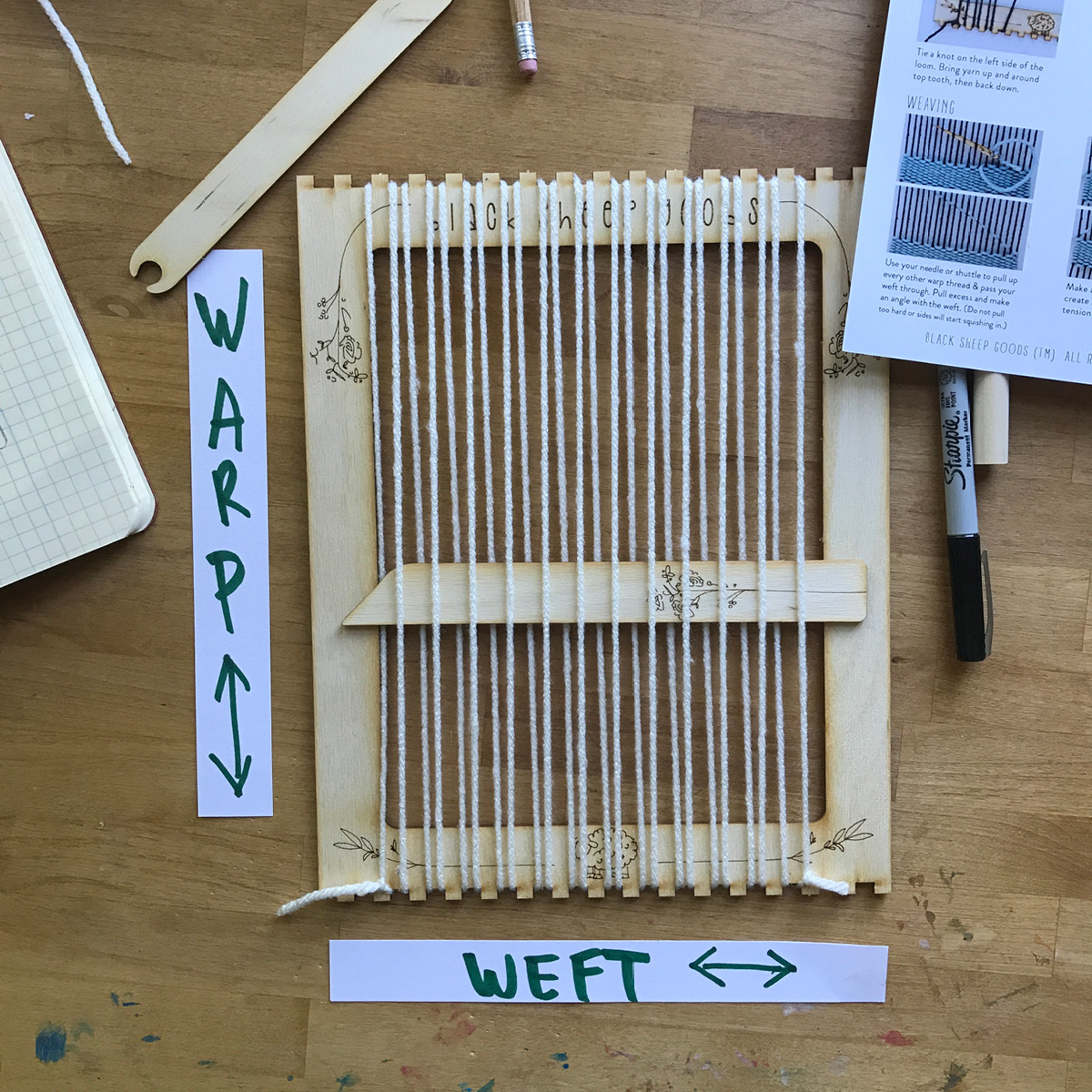 Also, it’s important to make these terms clear before starting. The warp threads are the original threads running N/S, the weft are the ones you are weaving into them, running E/W. I did not make these little signs for you, although they work well for this picture, I made them for myself and referenced them the whole time I was working. It was really helpful and I totally have it memorized now (maybe). 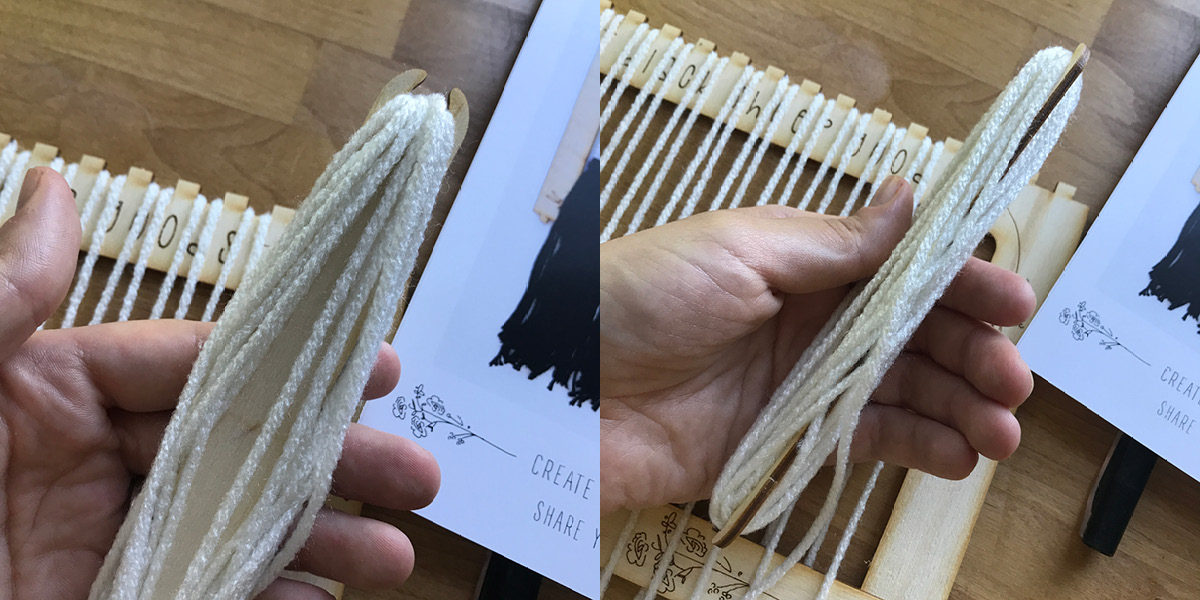 This little guy here is your shuttle. You’ll need to wind him up with the same color you used for the warp, because you’ll start your weaving with at least four rows of weaving before adding tassels (called rya) which are pretty much non-optional for the bottoms of decorative weavings. To wind the shuttle, tie the end of the yarn to the end, then make a figure 8 on the side, turn the shuttle and make another figure 8 on the other side, and so on. Do this several times, then cut ‘er loose. 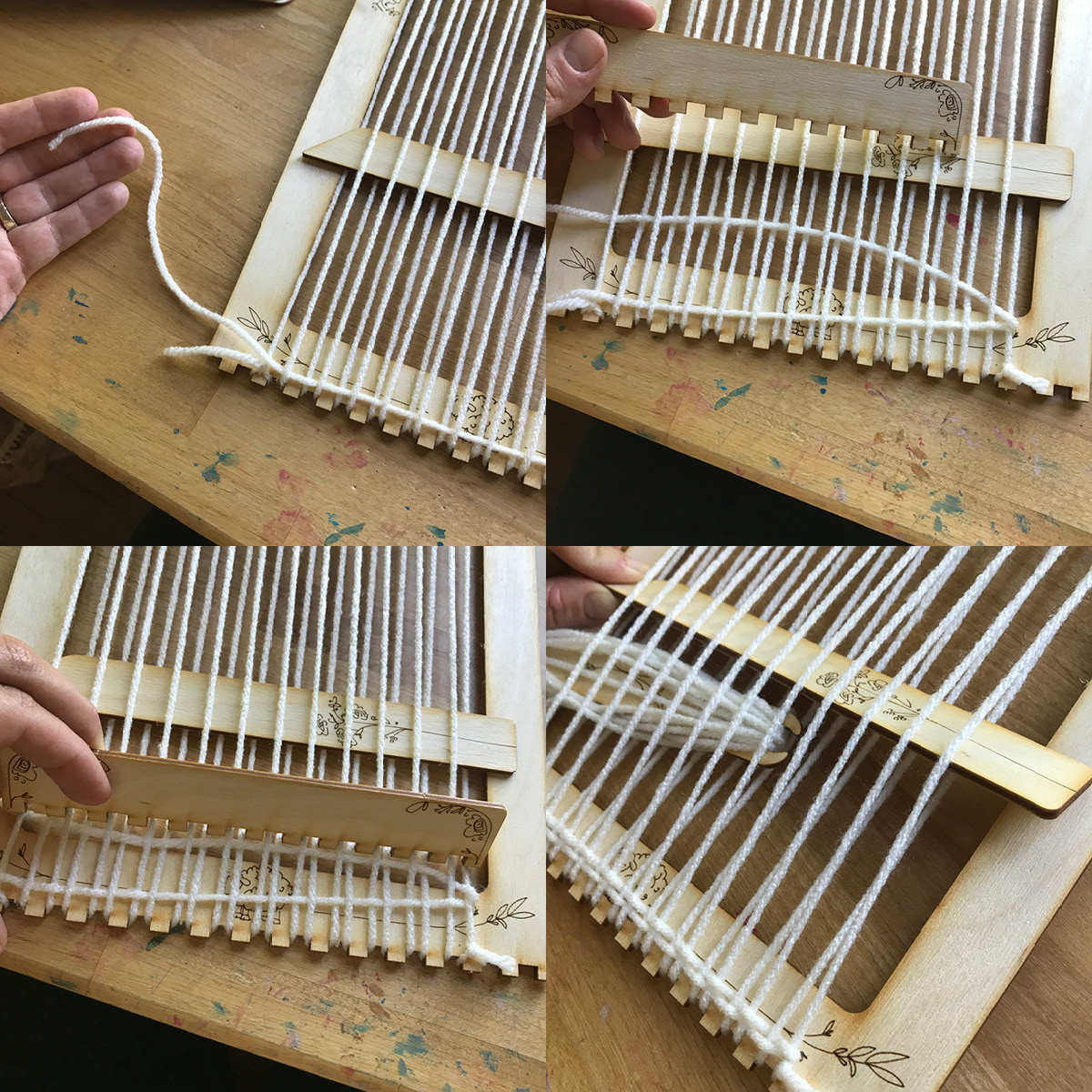 Next, pick up every other thread using the pickup stick. If you tilt the stick just a bit, you’ll have a little cave to pass the shuttle through. After your first pass (going either direction) leave a four inch tail at the end and remove the pickup stick. Pick up the alternate threads you did the first time, and pass the shuttle back through again. It’s okay to leave the thread in sort of an arc shape, this will help you leave enough slack, and you can use the comb to push the threads down so they lay evenly. I combed mine down after every pass, but I think you could probably go 2 or 3 passes before doing so, which would also help keep your warp threads from getting as fuzzy as mine did. You could also skip the pickup stick and just use the shuttle itself to weave back and forth through the threads if you find this easier. Just remember to pick up the alternate threads for each pass, or you’ll undo your work.

After you’ve done the first four rows, just cut off the thread leaving about 4 inches as you did in the beginning. This is what you’ll do as you start and end new sections. When the piece is finished, you’ll used the needle to tuck these threads into the back of the weaving. 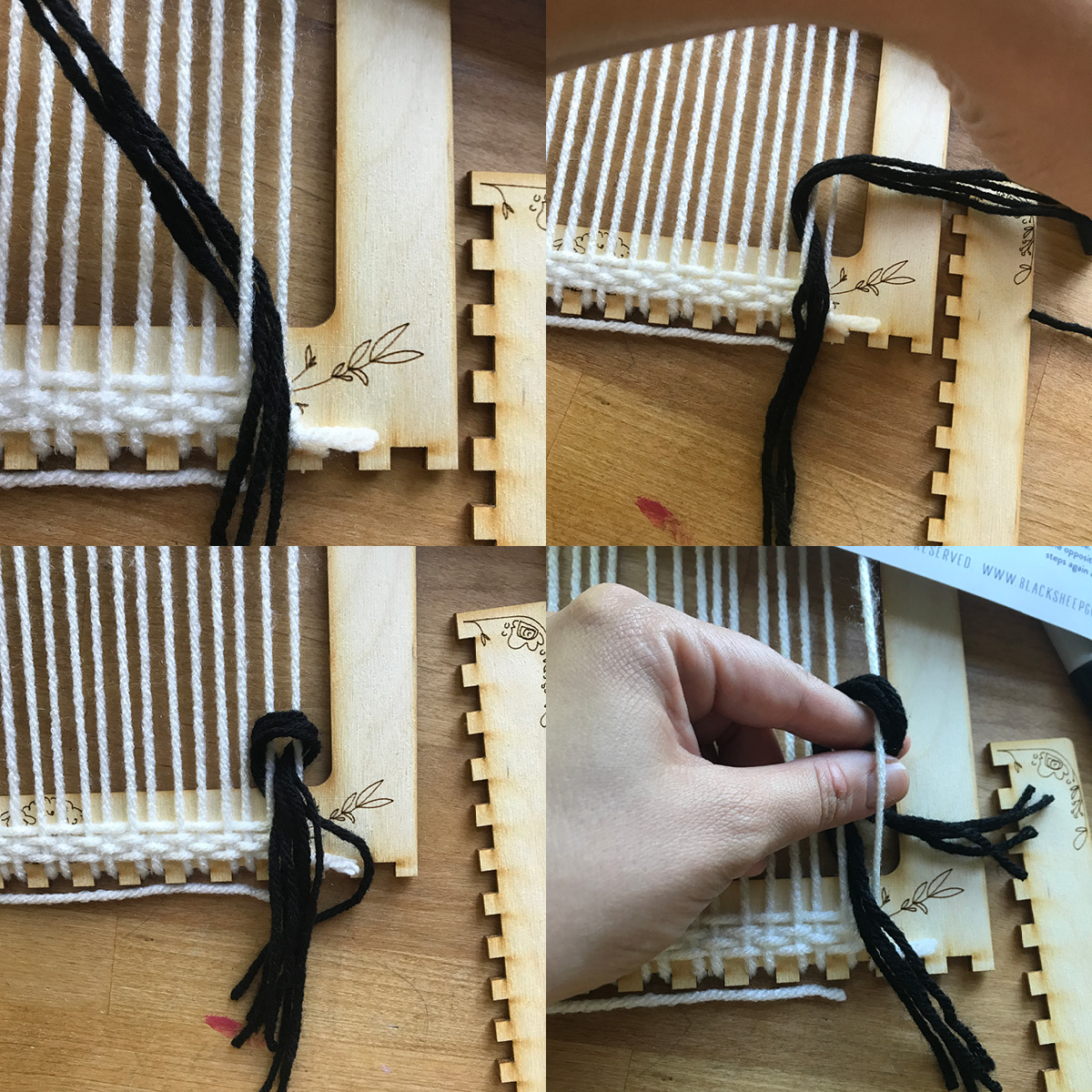 I used four threads for each tassel, which is what they show in their instruction photo. I went ahead and cut five of the same length so I would have one to measure from for the next tassel I made, since I want this row to be of even length. That being said, its okay if tassel ends aren’t even, or if they are too long. You can always trim them at the end. Follow the process pictured above, and in the last step be sure not to pull too tight, the two warp threads your tying onto shouldn’t pull together. 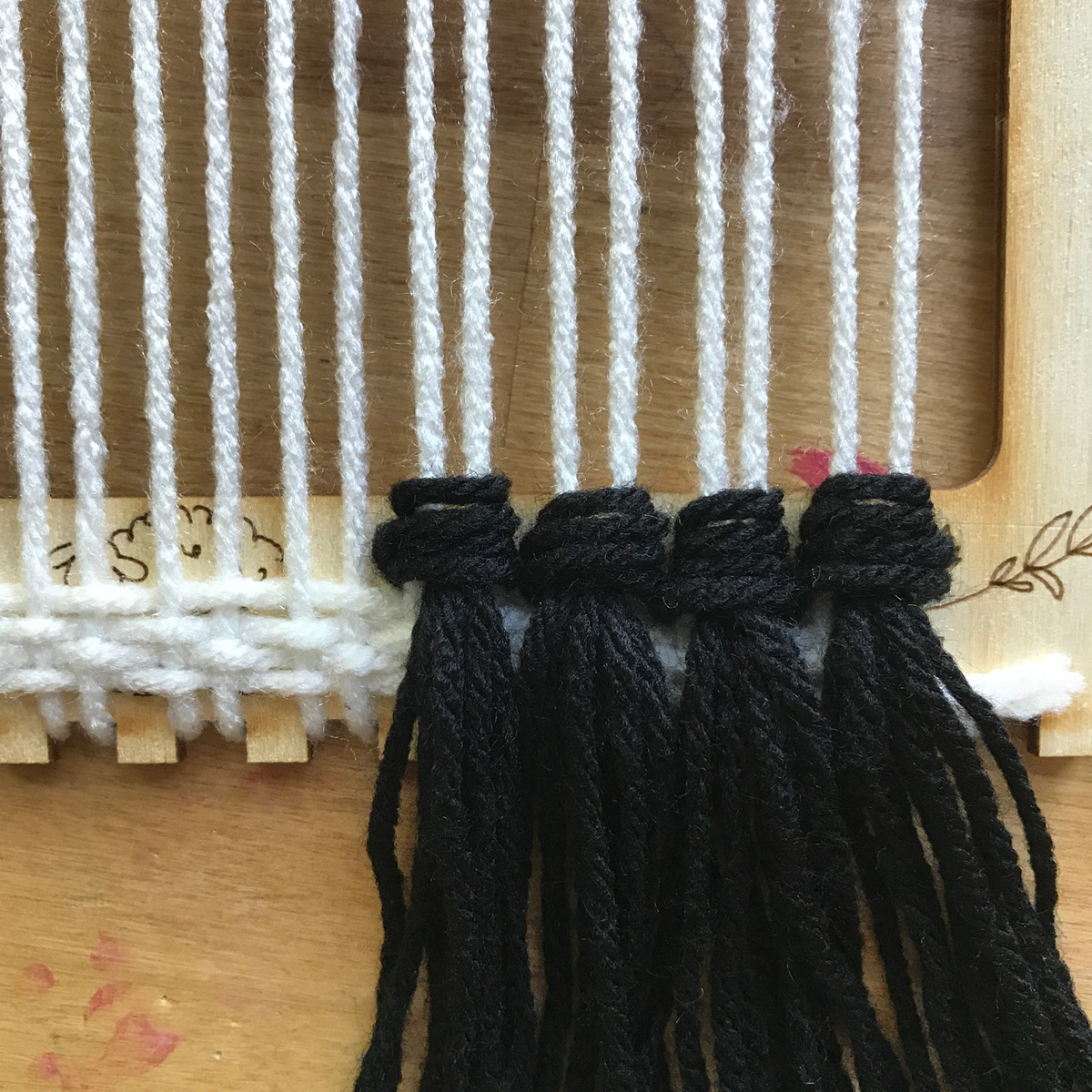 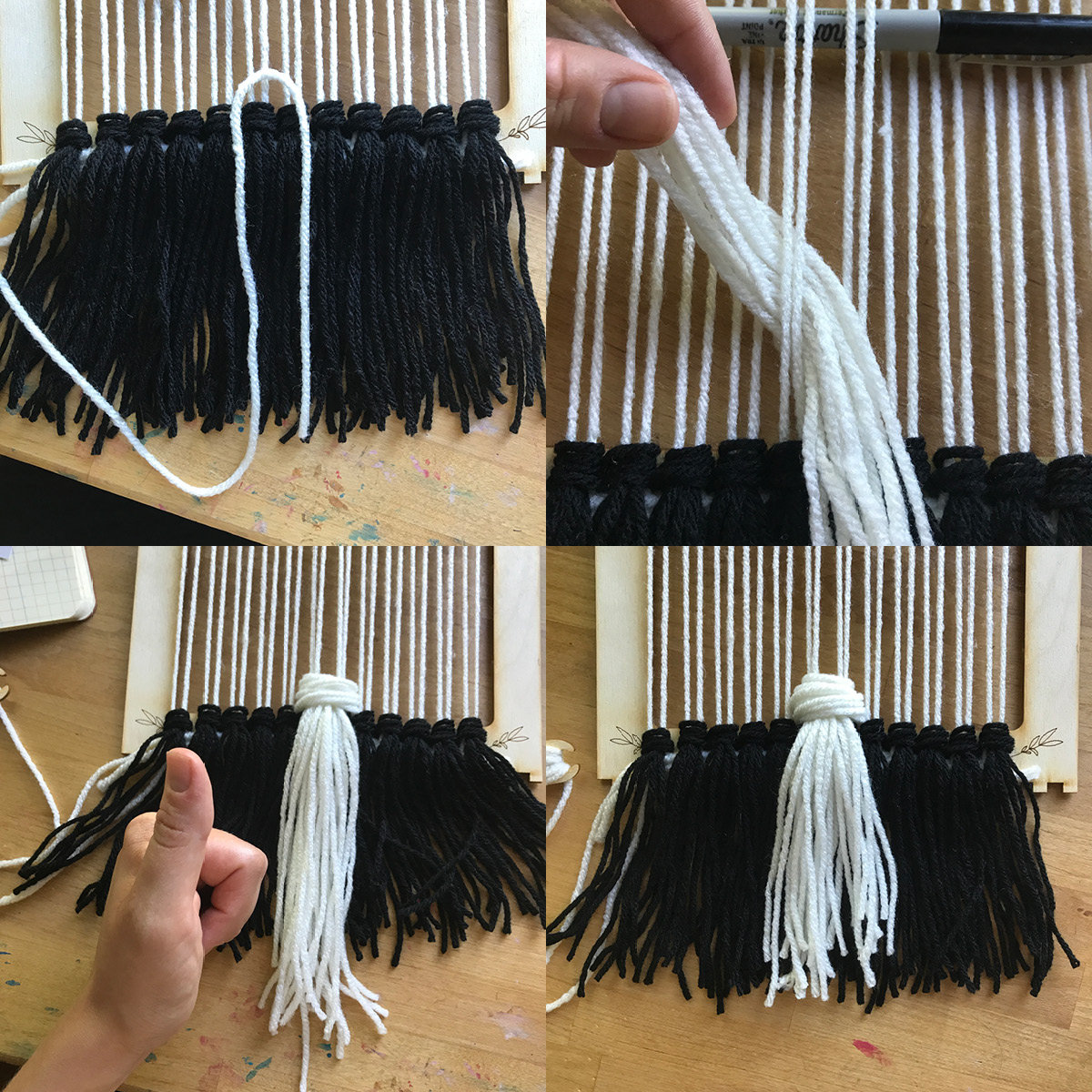 For the large center tassel, I measured out the length (first photo). I used twice as many threads as the small tassels (eight). The first tassel turned out too short (bottom right), so I made a much longer one. 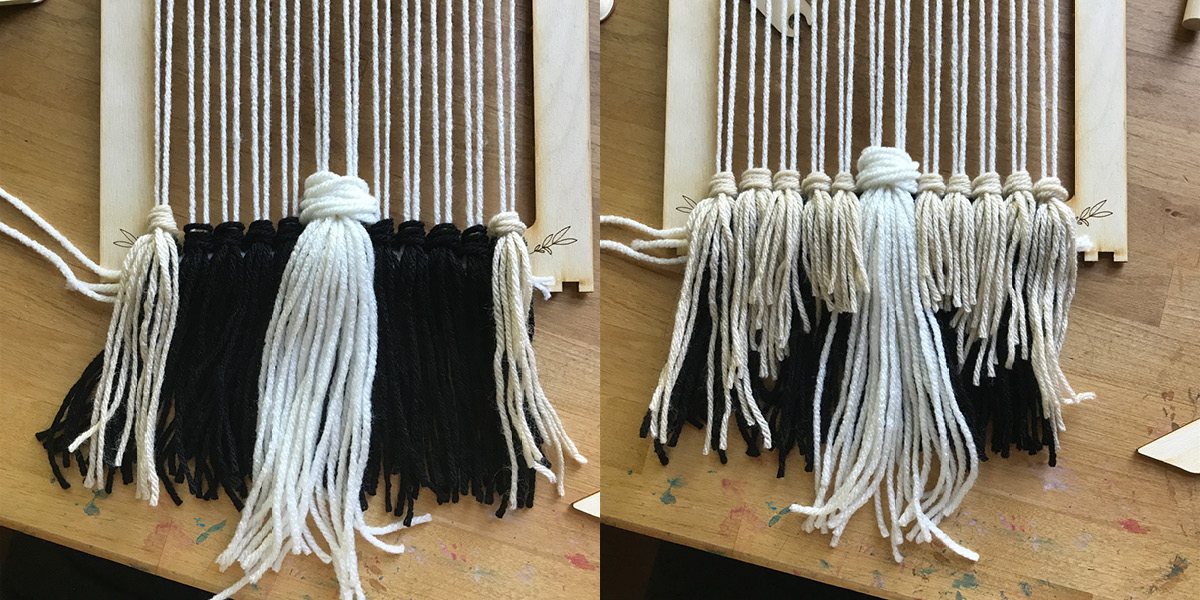 Now for MORE tassels. I  started on the outer edges and moved into the middle, cutting an extra length of tassel thread for each set, then chopped off about an inch from that extra and measured out the next size of tassel. I did the two inner sets the same size. At this point I’m dying to trim the ends and even it all out, but I think this will be easier while its hanging, so I wait. 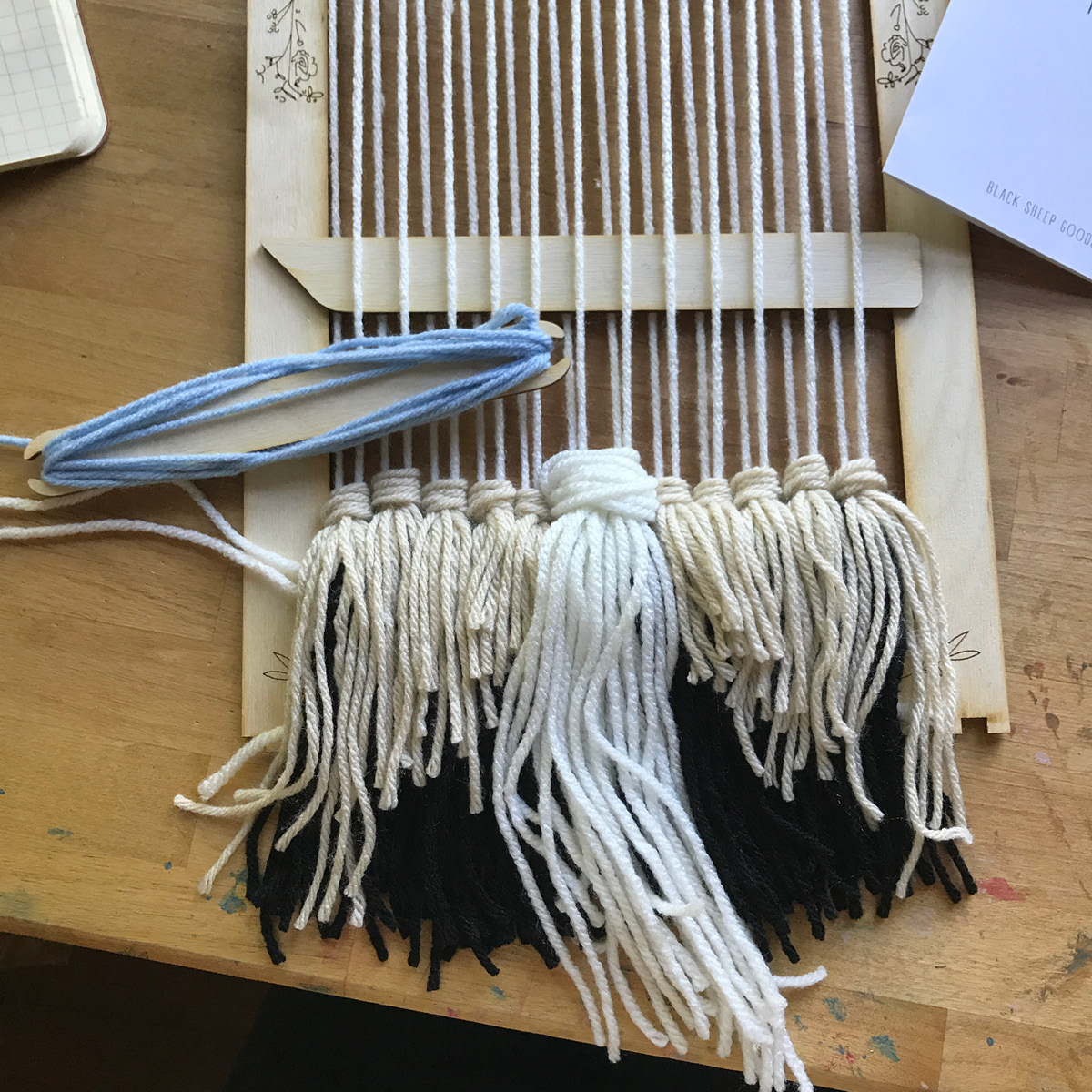 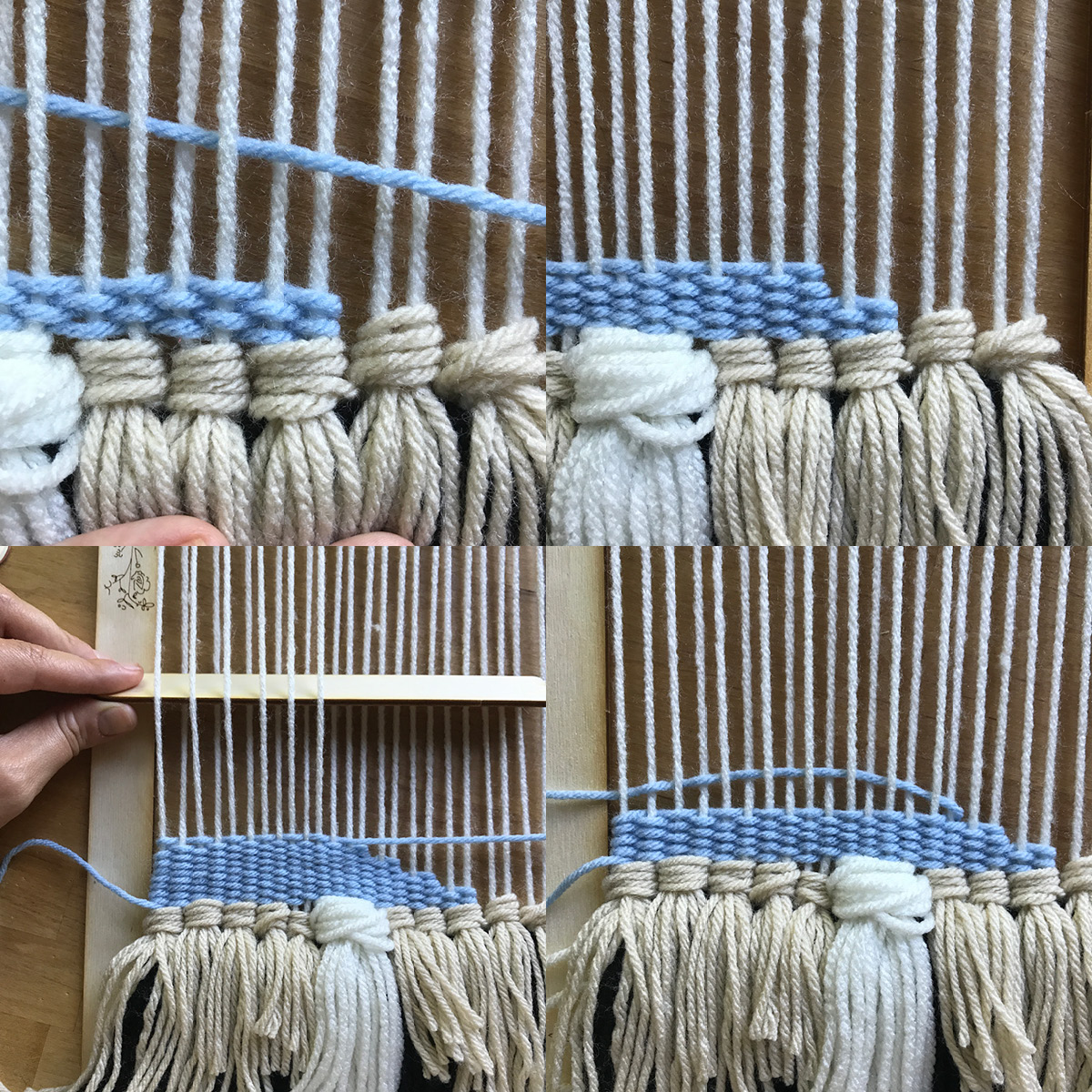 Now for some color. According to my pattern, I thread up the shuttle with some blue thread. I visualize how far across I want the blue to go, that’s how far I feed the shuttle through, and then I just turn it around. I go two rows, then decrease the warp threads by two and weave two more rows. I keep going until its as high as I like. 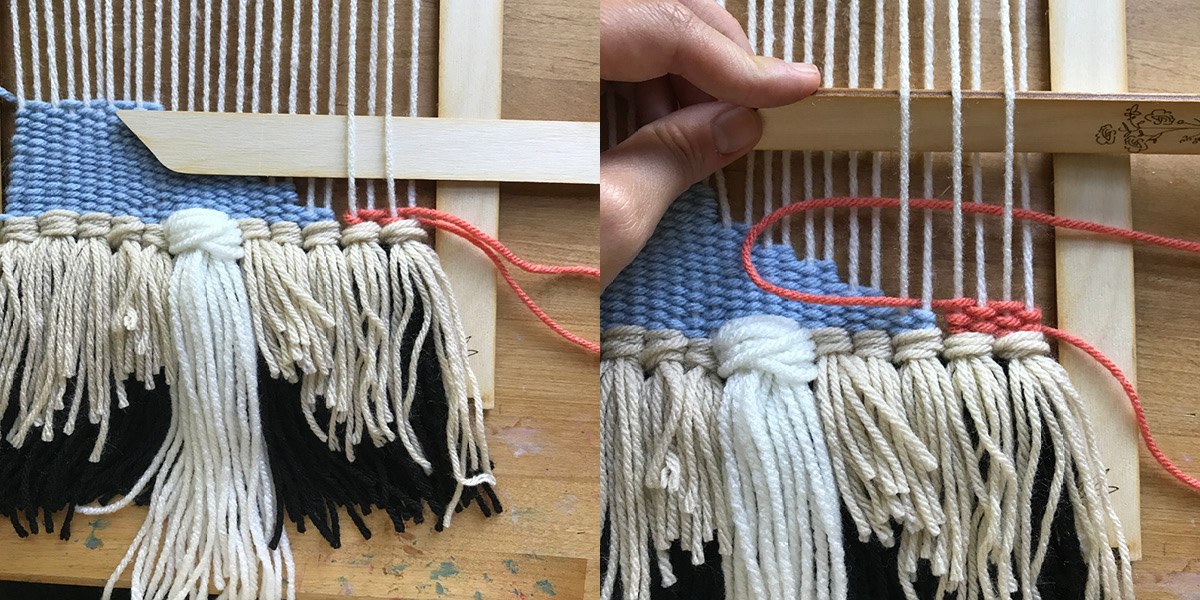 And now for the pink! As I mentioned before, be careful with thread tension. Don’t pull too tight! You don’t want the sides pulling in on you, and these two color blocks will pull away from each other if you weave too tight. 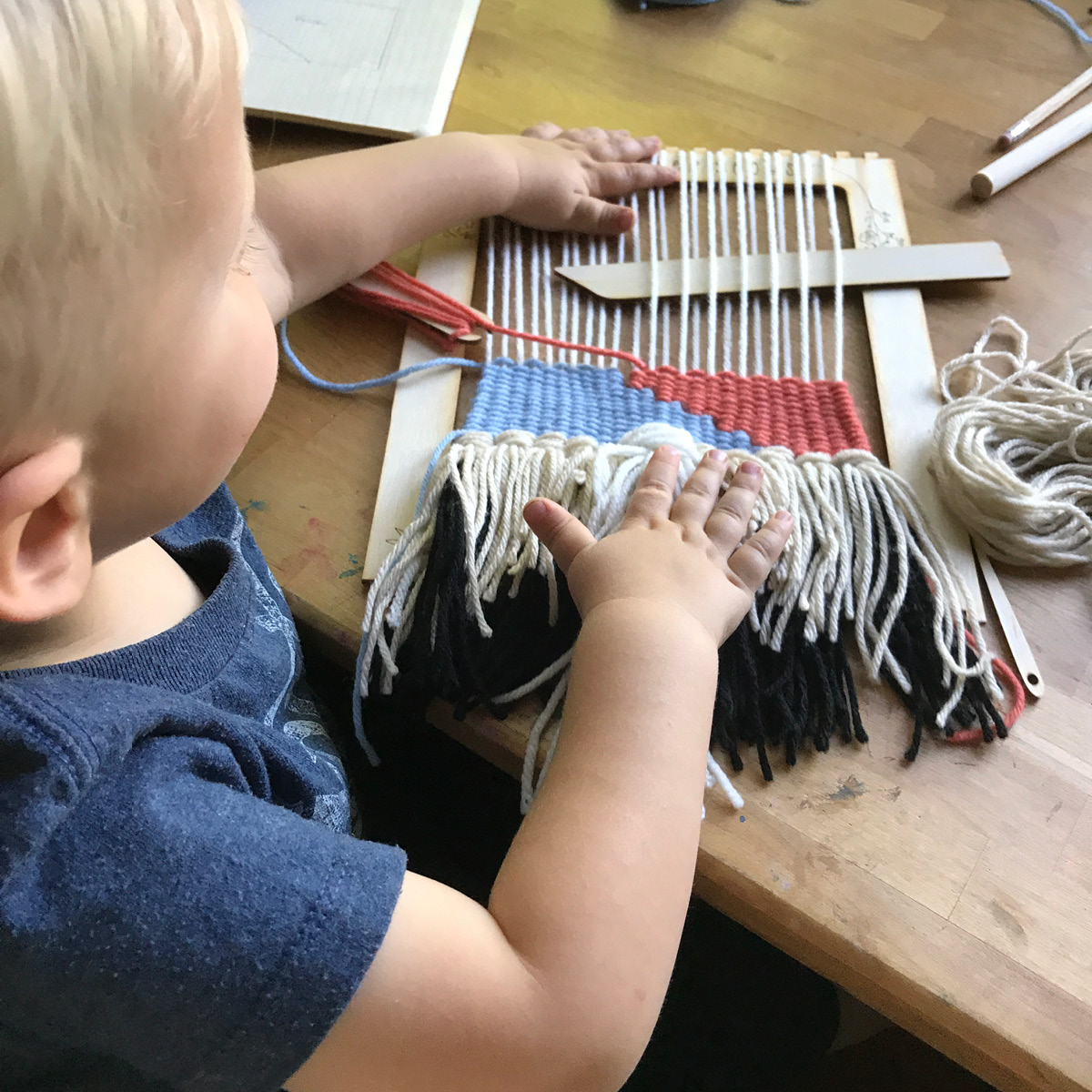 Finished the pink and got a little visitor. “Are you making a broom, mom?” Good guess! 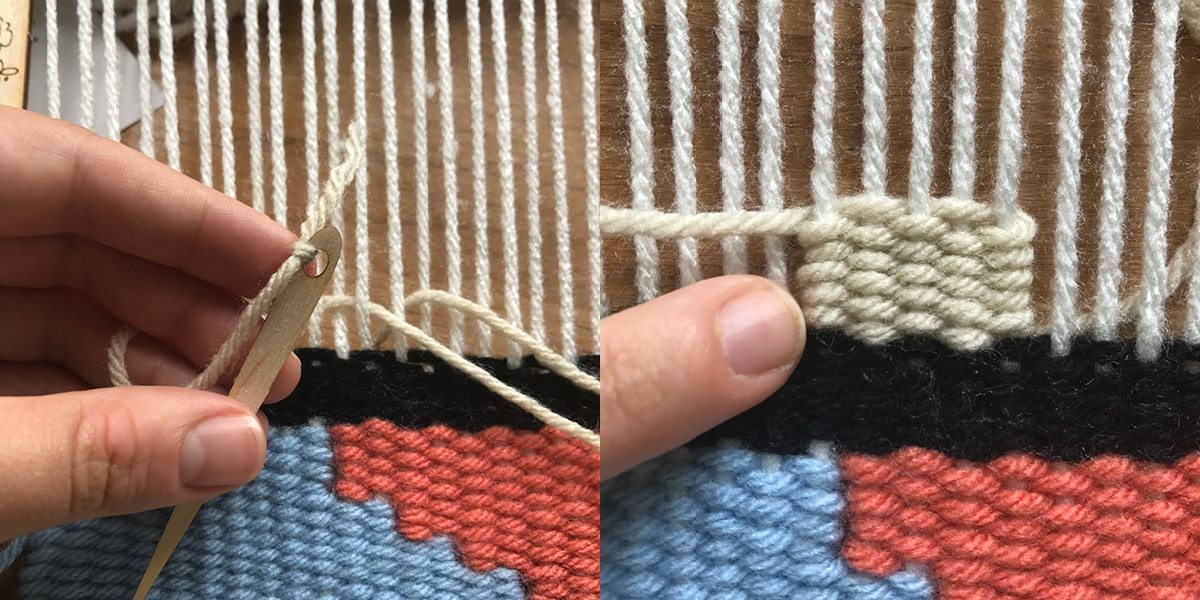 I do a block of black, then start on the little beige square. For this section, I count the warp threads to find the middle, and just cut a length of beige to use with the needle. Tie the string to the end of the needle (it WILL slip out!) and do a small block of weaving. 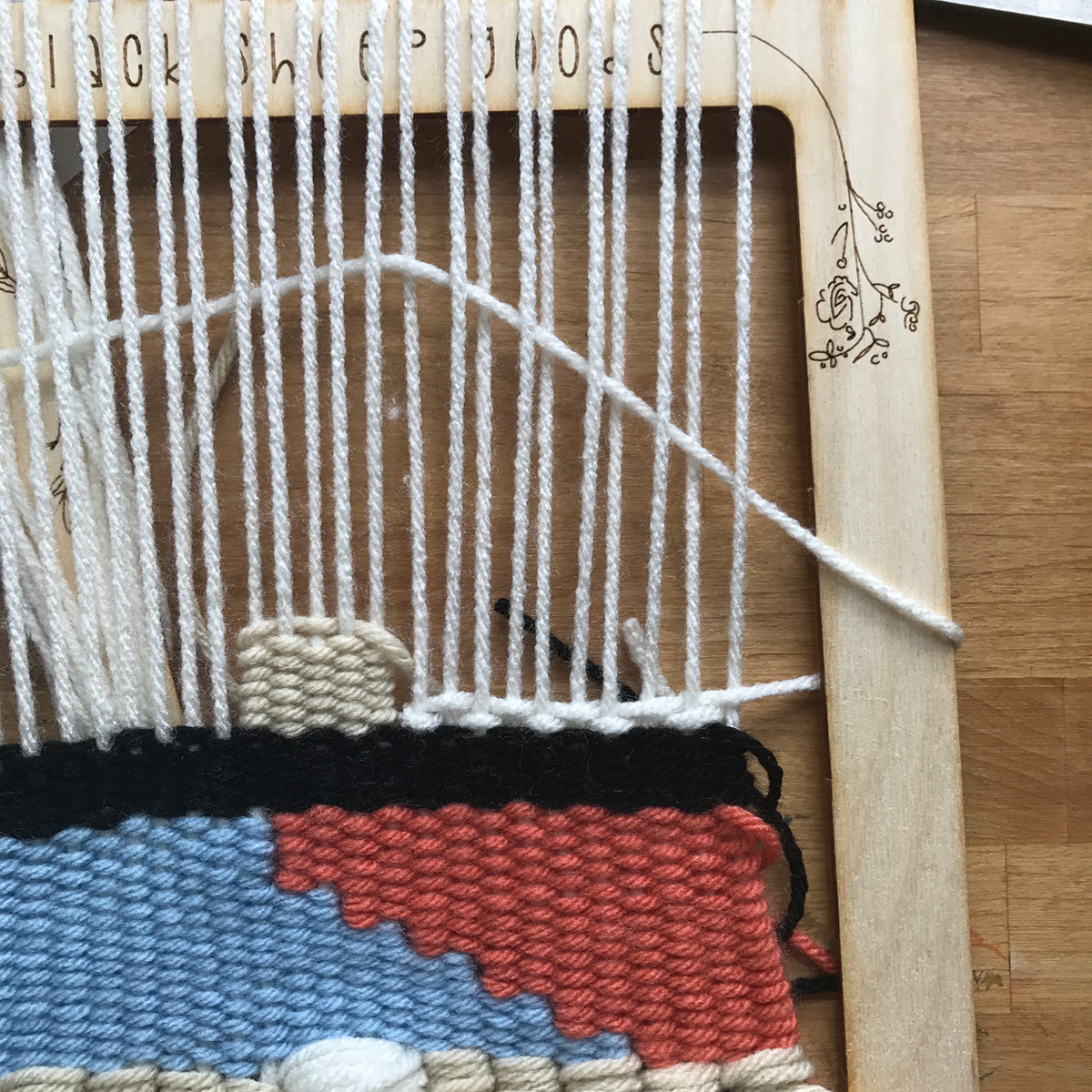 I make a WEE mistake while doing the blocks of white on either side. Ahem. Don’t weave your weaving to the frame. 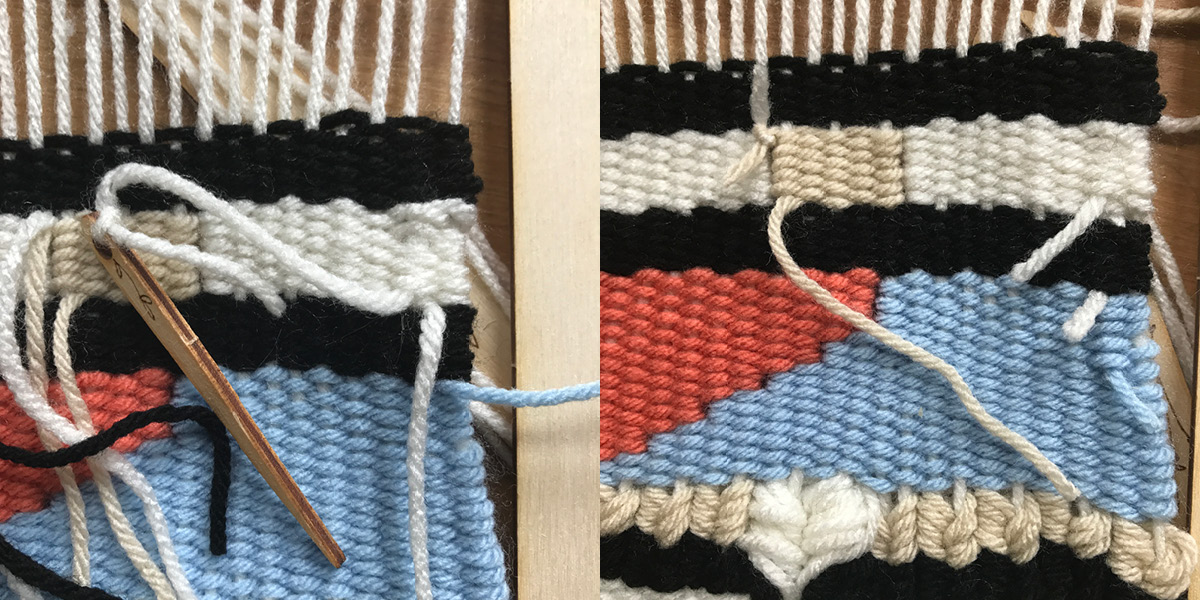 After adding another block of black, I decide to tuck in some of the ends in the back, which are adding up. Just tie the end of an end (ha) to the needle, and sew it underneath about 3 or four weaved loops. Then you can just trim or tie it off.

More tassels! Then some pink (see how I just go right around those tassels?) and some blue on top o’ that. 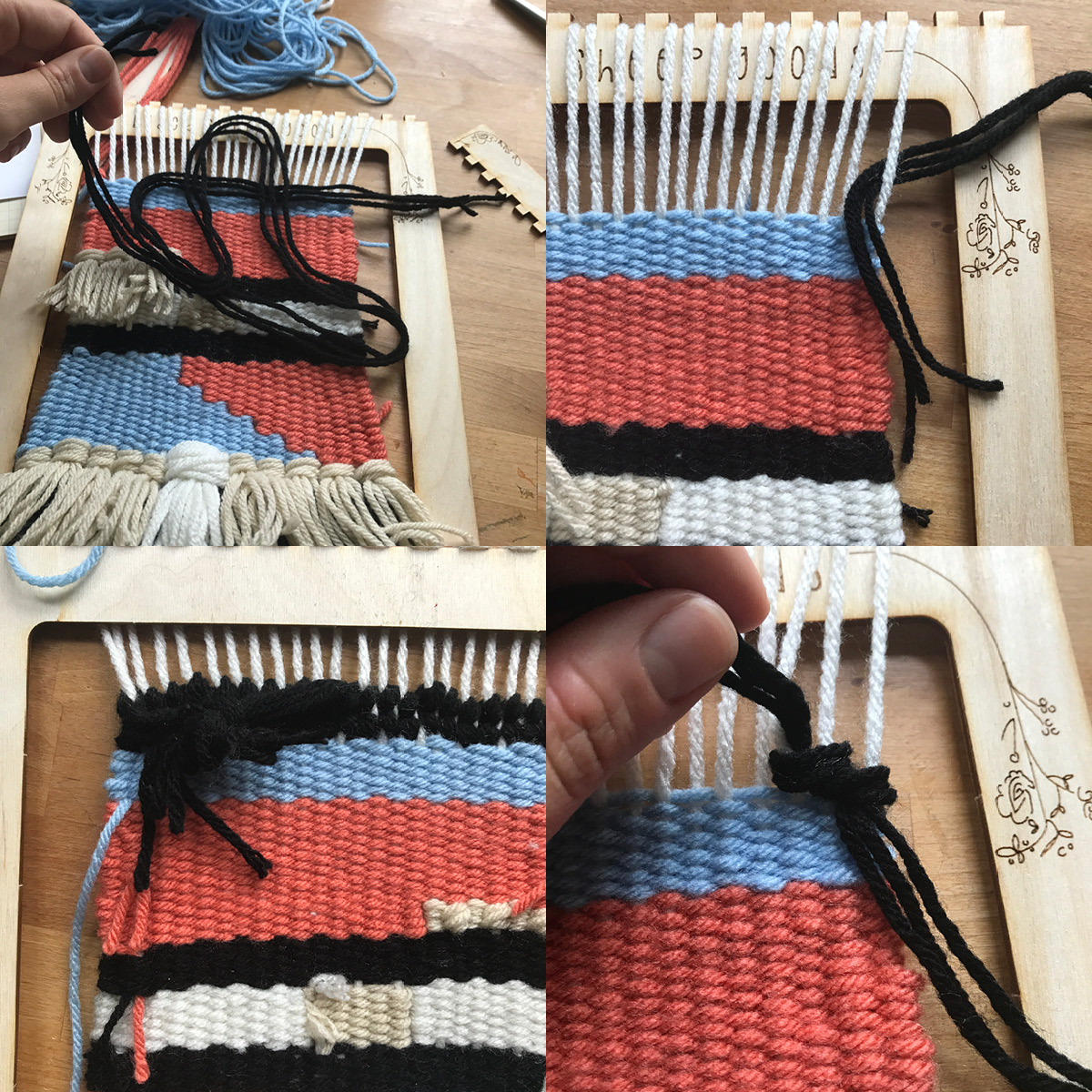 Now. They tell you to finish the weaving in two rows of “soumak” which is a twisty type deal. First, cut three pieces of yarn in an undisclosed length. You can see from the first photo what I used, and it was just barely long enough. Put the end through the first pair of weft strings you’re going to start with, then wrap around over the top, to the left of the warp string, then back up through the middle of the first two again. Come back around the left side of the next pair of warp strings. Keep going until you get to the end, at which point you will switch your wrapping direction and continue the other way. I tied a knot at the end, but I can’t say I know the BEST way to do this. It turned out to be a pretty big knot. But at least you have my solidarity with this issue. 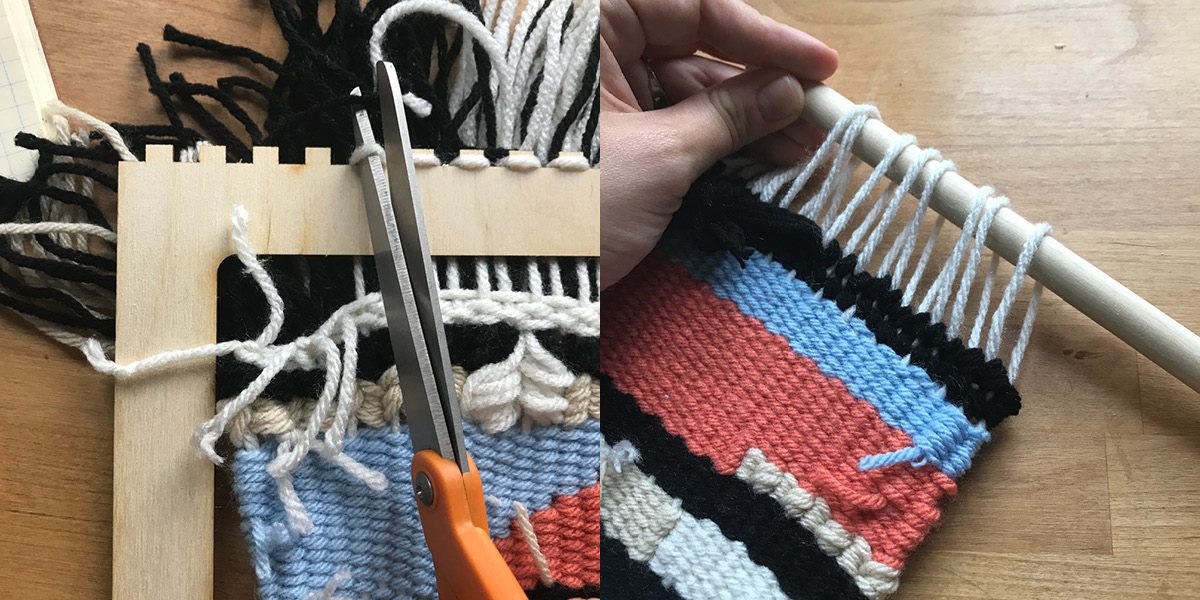 Now you git ta cut ‘er loose! Sorry- resuming whole words… Cut the loops on the BOTTOM of your weaving, then slide the top loops off. Slide the provided dowel into the top loops, and that’s it! You’re amazing! You did it! 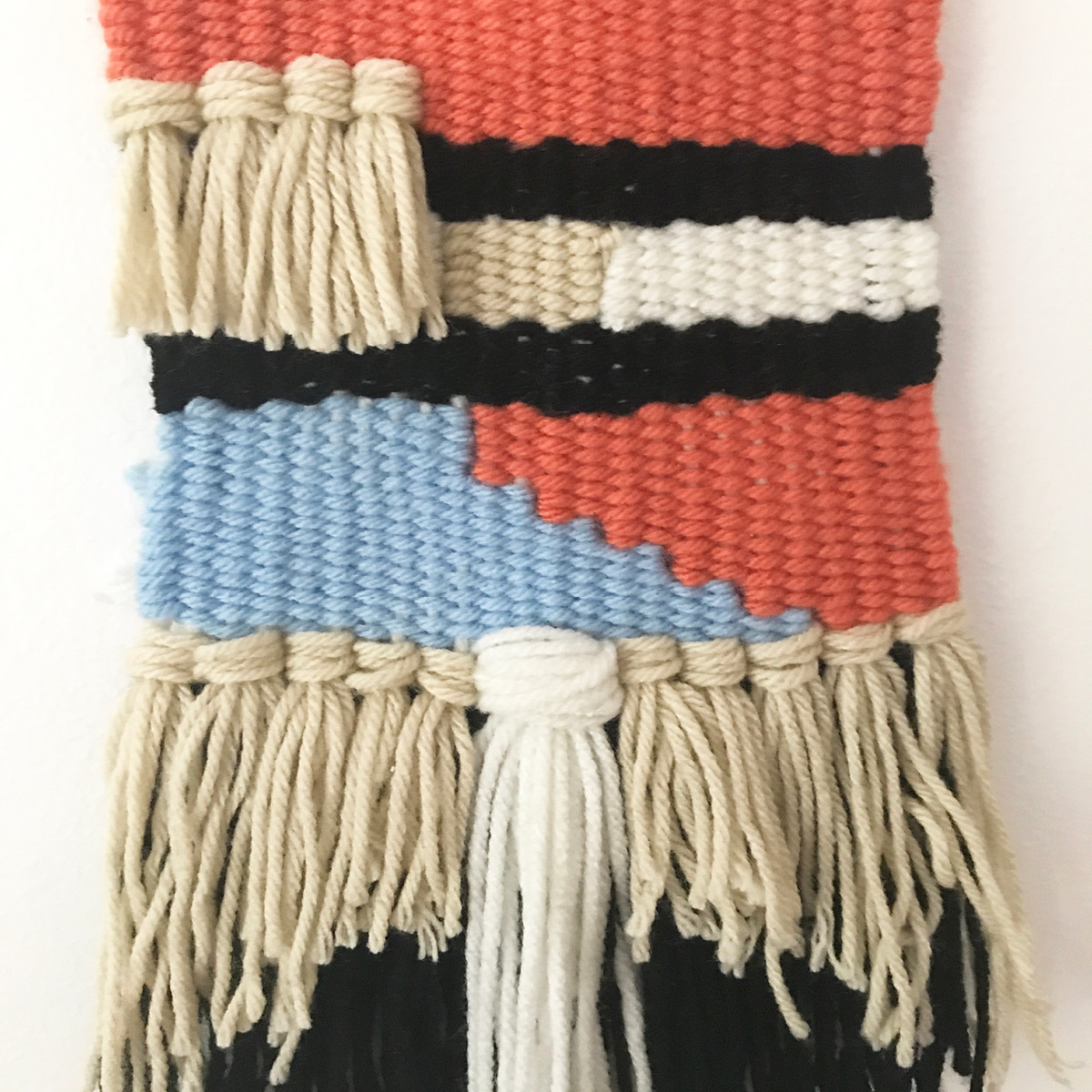 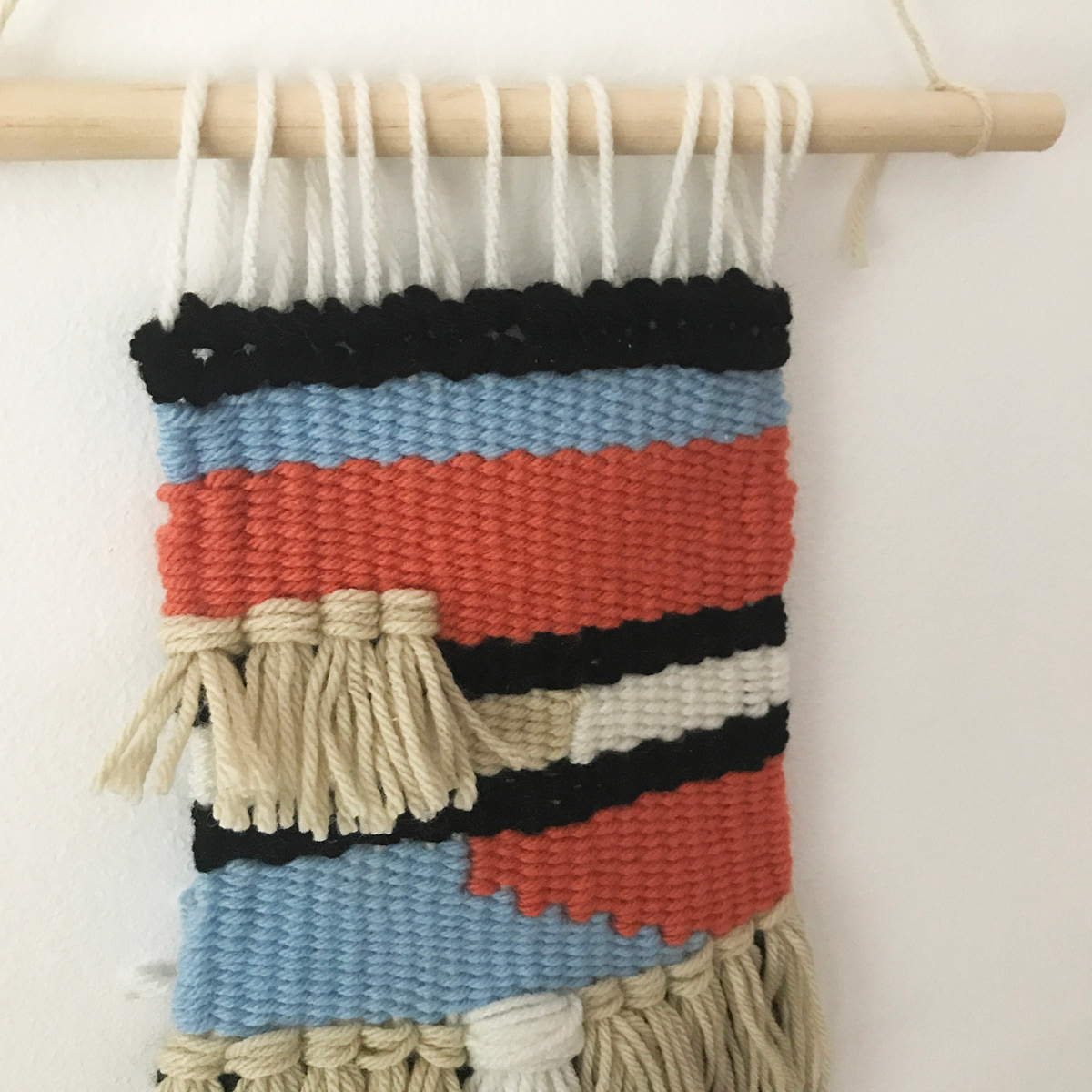 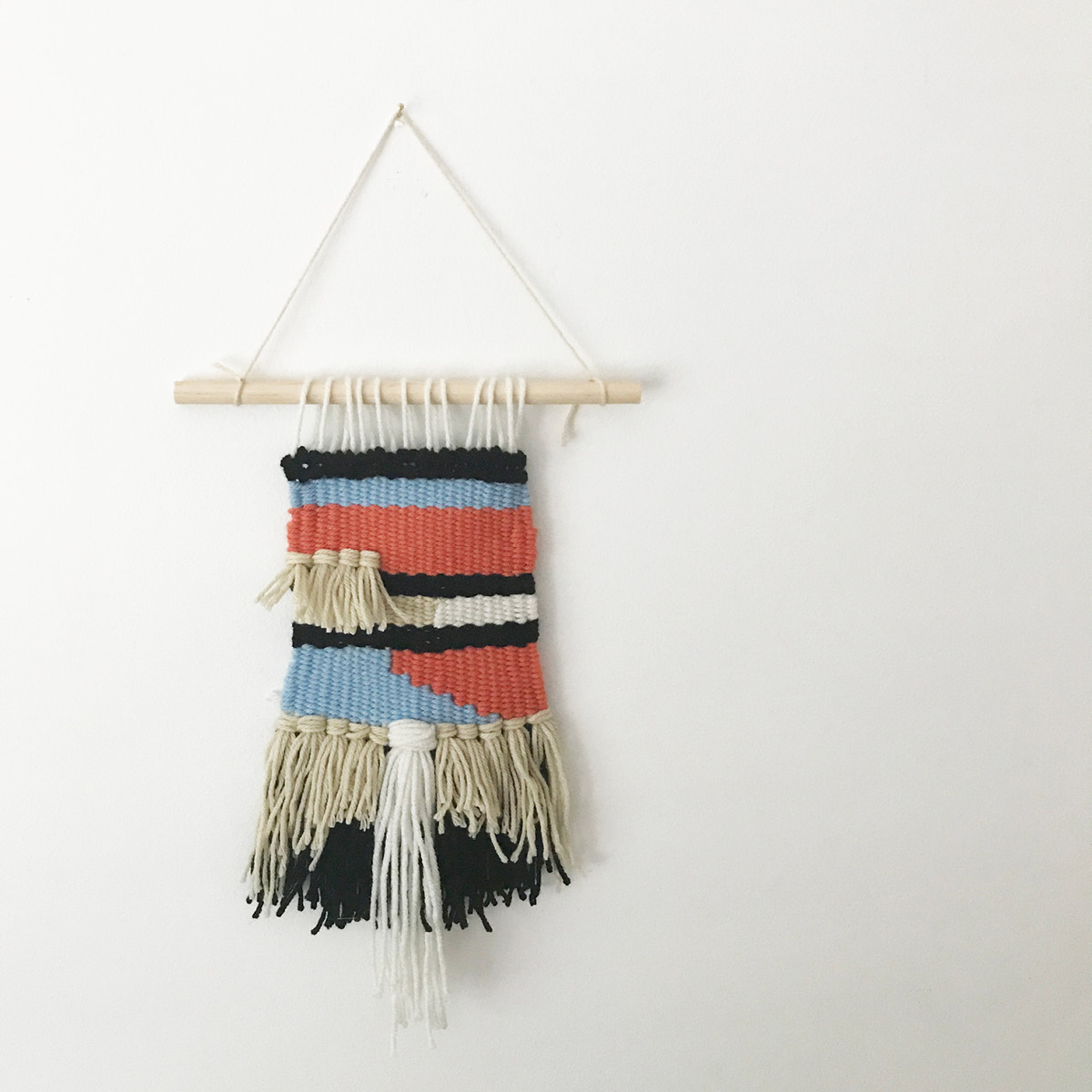 This took me a couple different sittings to complete, about 4 total hours of work. I really enjoyed it and I think you will too! Come by and pick up a kit from Homespun, then share your photos with us!