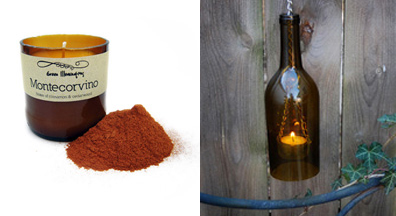 Jarod and Shan didn’t set out to sell things, they just wanted to make unique lanterns for home decoration.

“Once a few friends saw our wine bottle lanterns they said we should be selling them,” Shan said. “From there we got into the candle making business because we wanted to offer more than one product and were looking for a way to use the bottoms of the bottles that were being discarded from the lanterns.”

Jarod – 1. My real-life job is working at IUPUI as a student advisor.  I advise students in planning days of service that range from 10-600 people.  I also get to travel around the country and the world on service-based trips. 2. Over the past couple of years, I have really gotten into reading Tarot and Oracle cards.  Anyone need a reading? 3. I have traveled to more than 27 countries.  I was an International Studies major in undergrad and I love to travel.  I get really excited when I have when I have the chance to experience a new culture.

Shan – 1. I love horror movies, and the cheesier the better! 2. I wanted to be an architect when I was little until I realized the math that was involved. 3. I don’t eat fruits or vegetables. I’m a carnivore!

Remember when the Hoosier Dome was deflated, demolished, and hauled off in a convoy of trucks? Not all of it ended up in landfills. In fact, acres and acres of UV-resistant canvas roof were claimed by a group of designers and are being re-purposed as bags, clutches, wallets, journals, bookmarks, and ornaments. “We began with the idea that the SOLUTION to any urban problem must consider transit, environment, and design in unison,” writes Michael Bricker. “As such, we work with communities and designers to develop innovative and affordable strategies to enhance Indianapolis’ urban quality of life. In order to do this, we MAKE things. And these small things help fund the big things – the big IDEAS. Our DOME BAG PROJECT is a quintessential example of this way of thinking and working. After we salvaged the roof of the RCA/Hoosier Dome in 2008, we started working with local designers to make products from the fabric. The sale of these products helped us fund the installation of larger public shade structures and pavilions throughout our community.”

People for Urban Progress also make a line of nifty shirts and posters to underwrite their larger project which are also available at Homespun.

Based in: Charlestown, Ind.

There’s a lot of things that we could say about the Jonas family and the products they make but we’ll just leave you with this clip from NBC’s Today Show instead.

Have you ever strolled up to the front or back door of Homespun on a Monday or Tuesday, your heart set on a particular item or needing to find that perfect something for that special someone, only to find the doors locked and the lights off? Well sigh no more, craft lover. Homespun is open on Mondays and Tuesdays through the holiday season. 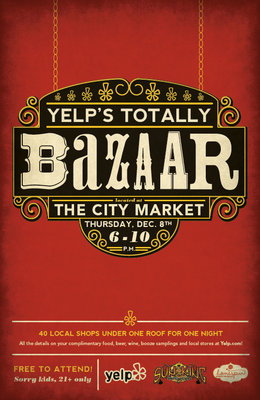 Homespun is also proud to partner with Yelp Indy and Sun King Brewing Co. to present Totally Bazaar, a gathering of 50 independent makers and brick and mortar shops inside Indianapolis City Market. We’ll be partying on the mezzanine from 6 to 10 p.m. on Thursday, December 8. Hope to see you there!

Based in: Indianapolis, Ind.

“It all started when I made a piñata for my son and daughter for their birthday party,” says Vanessa Monfreda. The Chilean-born artist says she, “got hooked and fascinated with the medium of paper Mache and its endless possibilities. And soon our home studio – which is really our living room – was invaded by floating piggies with mustaches, aliens, friendly three-eyed mini monsters and all sort of imaginary friends.”

Monfreda initially sold her creations as piñatas but has taken to describing them as mixed media sculptures. More solidly constructed than mass-market Mexican-style piñatas, Monfreda uses “discarded materials or whatever is around me for no use. I recycle not just out of environmental reasons, but also out of economic reasons and availability,” she says.

When Monfreda isn’t making objects she tends to her family’s garden and raises three teenage sons and an elementary-aged daughter. “In other words: One drummer, one Karate champion, one soccer player and a princess,” she says.

Vanessa Monfreda Fun Facts: I am fluent in three languages- German, Spanish and English and I constantly think in three languages as well. Originally I am from Chile, but I grew up in Germany. Other than that I am pretty boring and just like everybody else. When you have lived in so many places you just realize that pretty much everybody is the same. You start focusing on the similarities rather on the differences.